the Inseparability of Cause and Effect

'What is the cause of event (A) ?”'– is the basic question of inquiry in all disciplines of science.  Investigation into 'Causation' dominated the whole history of philosophy:

“Causation is the most fundamental connection in the universe. Without it, there would be no

science or technology. There would be no moral responsibility either, as none of our thoughts

A detailed study into causation branches into many aspects ranging from investigation about whether regularity of occurrences leads to consider it as a cause. Or : is there a deterministic necessity of cause and effect, and if so, what about the problem of free will, etc.

Other areas of inquiry about causation relate to the “transitivity thread” of causes, and goes further to ask the question of “What if” : What if a certain particular cause did not take place, how this would have affected the history of events, etc.  In addition to the mentioned inquiries, a very important question is raised about the time-sequence of events, and whether causes are simultaneous with their effect.

The contribution of 18th century philosopher David Hume to the study of causation offered a rich ground of perspectives, some of which were questioned or developed further by various sources in philosophical literature.

Even in relatively simple events, finding the 'true cause' of an event becomes difficult.  Confusion may occur between the real cause of the event on one hand - and conditions (necessary but not sufficient) for the effect to take place.  For example: a seed of plant necessarily requires moist soil to sprout from, but in many cases, even with proper soil conditions, sprouting out of the plant does not take place. Moist soil here is a necessity but it is not sufficient. In this example, moist soil is a "condition" - it is not a "cause".

a "cause", and what can be referred to as "condition":

“A problem, no matter what kind, is an effect produced by

a combination of inherent causes and external [conditions].

Here is a glass of water. Let's suppose that there is some

sediment at the bottom of the glass.  If you stir the contents,

the water will become dirty.

In this case, the sediments is the inherent cause,

The mentioned example explains further the benefit of correctly attributing the cause to the side responsible for the Creation of the Effect .   In the field of solving disputes among people, one side in a dispute may blame the other side - of being "the cause" of a problem.  For example, one accuses another that the act of "stirring the situation" was the cause of developing a tense state (similar to creating the state of murky water stirred by an external spoon).

Nonetheless, the other side insists that in this example, the external spoon is not the cause, because no matter how hard you stir, if there was no sediment within the glass in the first place, then the water will remain clear.  This is a metaphor for individuals not realizing that the true cause of one's unhappiness is within themselves, and that they are merely experiencing the effect of that cause, after it has been activated by someone else.

Taking the example of the spoon in the glass of water further, we find an interesting observation:  we observe that the cause, together with the condition and the effect - are all present at the same time.

Cause & Effect as an indivisible process

When we look at the process linking cause and effect as one complete process, it is then possible to see them both as an uninterrupted oneness of activity.

The togetherness of Cause and Effect is easy to observe in simple experiment (such as in domino effect) - but in more complicated phenomena, the direct observation of this togetherness is not easy (nor even possible) to observe.  In sophisticated processes of interactions, an initial cause may follow a "nonlinear relationship" with effects of different nature - such as in chemical reactions, or changes made in physiological or biological phenomena - too sophisticated to simplify.

The Certainty of  NonRandomness 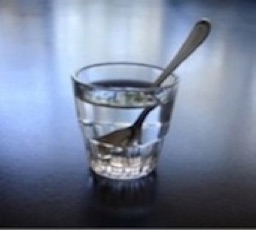