The Certainty of NonRandomness

The most basic observation about the world is that the world is not random.  Despite their infinite complexity – phenomena are not chaotic.

In the physical domain, relationships between objects reveal principles operating at the background of objects interactions.  Principles can express either strict laws, or just mere correlations between various quantities in other phenomena.

In the mental field, relationships manifest certain tendencies and motivations - taking form of patterns expressing a specific essence and direction.  Although mental phenomena do not follow strict laws - as is the case in the deterministic physical domain - nevertheless the occurrence of mental events display patterns.  Mental patterns can be even predictable on individual or social levels.  Some philosophers question causality, but they cannot deny the existence of patterns (or NonRandomness) in all phenomena they observe.

The Certainty of Change and the Certainty of Connectedness - both necessitate NonRandomness.  On one hand, all objects are composites of diverse elements (which change in time). On the other hand the changes in the composition and elements are connected through patterns of relationships with the environment.

If there was no Order to bind them, then the changing and interdependent phenomena could go chaotic, but tne world is not chaotic.

There must be a bond, a law, that causes the dynamism of change and connectedness to form patterns.  Without a law of certain order there would have been no consistent phenomena to distinguish or observe in the first place.

NonRandomness of the Physical Aspect of Phenomena

NonRandomness is revealed in various expressions.  Deterministic laws (such as gravity, electromagnetism, etc.) express predictable interactions.  Another expression of NonRandomness is correlation or relationships which are not causation-based (for example correlation between mental stress and physical health).  Complex phenomena, which variables are highly sensitive to initial conditions (weather systems,

The most familiar patters are spatial arrangement of elements,

as can be observed in plants and flowers.

In the temporal domain, a pattern can describe a particular sequence of events

(or behaviour) taking place in consecutive phases in time.

The laws of nature express systematic and consistent patterns,

expressing the flow of causes and effects.

Unpredictability of the outcome of some phenomena - means that our knowledge does not encompass the dynamism of changes of all involved factors.  For example: it is possible to precisely predict the direction of movement of two or three colliding billiard balls, but when the number of colliding particles amounts to millions (such as in moving gas particles) then our predictability of what direction a certain particle would follow - is not calculable, and hence the movement is called 'random'.  However, even in such 'random movement' (as is the case in colliding gas molecules), a strictly defined pattern emerges on the macro scale.  The result of the incalculable or "random" movements of all molecules is a consistent relationship (Boyle's Law) between the volume (or space occupied by these molecules), and overall temperature and pressure they induce.  On one level of observation, the movement of particles is random - on another level of observation, the movement of particles integrates in a predictable pattern.

The Patterns of Chaos:

"While most traditional science deals with supposedly predictable phenomena like gravity,

electricity, or chemical reactions, Chaos Theory deals with nonlinear things that are effectively

impossible to predict or control, like turbulence, weather, the stock market, our brain states,

and so on. These phenomena are often described by fractal mathematics, which captures the infinite

and many of the systems in which we live exhibit complex, chaotic behavior." (1)

The words "chaotic behavior" describe our inability to predict the future states of complex systems.  An example of studying such systems was Edward Lorenz's examination in 1960 of the dramatic effect of small deviations in the values of weather factors (temperature, humidity, etc…) on the outcome of future weather patterns:

"Lorenz had assumed that the difference [in values], only one part in a thousand, would be inconsequential.

However, due to the recursive nature of the equations, little errors would first cause tiny errors,

the next run even more. The final result of a long string of recursive calculations would lead to

a weather pattern totally different from the expected values". (2)

This nonlinear character of processes, where small deviations can sharply switch the weather system - is in itself a pattern. It is a pattern of processes, which are sensitive to initial conditions (and which have many potentials of future development).

NonRandomness of the Mental Aspect of Phenomena

Mental phenomena do not follow deterministic laws, because the outcome of mental phenomena depends on personal tendencies and motivations - and which vary over time.  Intentionality of one's consciousness, and hidden motivations in our subconsciousness - exert a direction, and having direction expresses NonRandomness.  In Western philosophy, a distinction is offered between living beings and inanimate matter through the criterion of “intentionality”:

“Intentionality is the power of minds to be about, to represent, or to stand for, things,

properties and states of affairs….

The word itself, was rehabilitated by the philosopher Franz Brentano

towards the end of the nineteenth century.

'Intentionality' is a philosopher's word. It derives from the Latin word

intentio, which in turn derives from the verb intendere,

which means being directed towards some goal or thing”. (3)

Apparently, “goals” and “intentions” - characterising the mental aspect - reveal the essence the having direction.  Studies in psychology investigate various levels or patterns associated with mindsets, such as anger, depression, inspiration, happiness, etc….This is a common observation, shared in Eastern philosophy, which classifies the wide spectrum of the state of mind into a spectrum of ten fields or “ten inner worlds” (ranging from the lowest life state of depression and self-destruction, to the highest state of enlightenment and creativity).  As reality confirms, one's behaviour is neither fully fixed nor it is random.

1. What is Chaos Theory? http://fractalfoundation.org/resources/what-is-chaos-theory/

Oneness of Cause and Effect 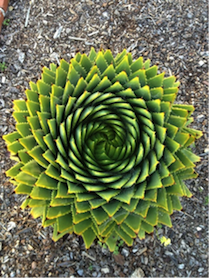